Spike Jonze was a BMXer

It's hard to believe magazines have taken such a nose dive out of relevance. Now the only magazines I encounter are on the table in a waiting room. There was a time when  that glossy stack of paper folded in half and stapled together was like a portal to another dimension. I could gaze for hours into this other dimension and see the place where I belonged. I could see my tribe.
In a bike magazine, the world existed for bikers. I could see bikes blasting into the air out of huge half pipes. Or I could see bikes doing flatland tricks on Hollywood Boulevard. It was proof that this biking thing existed.
The first bike magazines were formed out of the BMX racing culture. BMX racing had peaked before my time and was established as good clean All-American fun. It was fairly easy to explain to Grandpa that you like to race your bike around the track and go faster than the other guys. In a magazine like BMX Plus, every rider wore a full factory racing kit and they all looked pretty clean cut. The magazine would cover  competition results, gear reviews and profiles on pro riders. 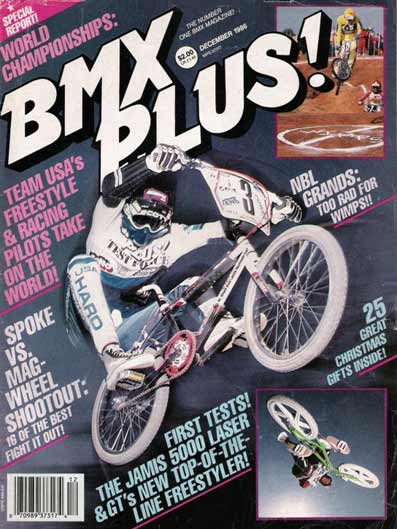 As freestyle and trick riding started to develop, BMX Plus  reluctantly covered it, but they remained committed to the racer. The magazine followed the design formula that had been established by car magazines and other sports magazines like Sports Illustrated. Each page was precisely formatted for a professional look. I can't just bag on BMX Plus, I read it all the time, but if 65% of the magazine was dedicated to racing, I was only reading the remaining pages. I would flip past all the racing pictures until I found someone doing tricks, and I'd start there. Then one day a new magazine showed up on the rack. 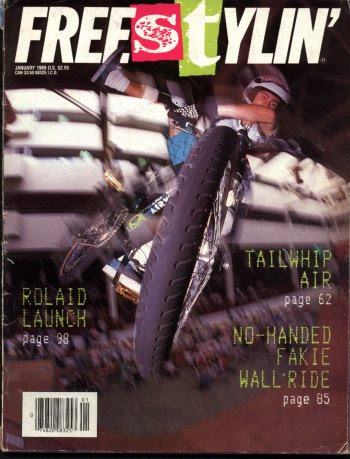 It was an entirely new kind of magazine. It didn't look like something that had come from a real publishing company, it looked like something that was printed in someone's garage. The mismatched font on the title was indicative of how the whole mag functioned. An article might start out in one font, and then halfway through the story would end up hand written on a picture of a piece of yellow legal pad. Like, the writer had burst through the door and handed it in minutes before it went to print.
And the stories were so much more than competition results with a profile of the winner. The stories would describe riders sessioning the angled walls of a parking garage outside the competition then, racing shopping carts down a hill. The mag had a feel as if it wasn't written by someone covering the action, it was written by riders in the action. Freestylin' had a great DIY look, and a new voice that spoke to me, but both of those aspects were secondary to the photography.
Pictures in Freestylin' could be blurry, or too dark. Sometimes, only half of the rider was in the frame. But each photo was shot close up and full of action. The photos of ramp riders were shot by someone standing on the deck, holding there camera directly underneath Mat Hoffman as he blasted some crazy trick. The pictures often looked like they were the last frame before the camera was knocked out of the shooter's hand by a bike tire. 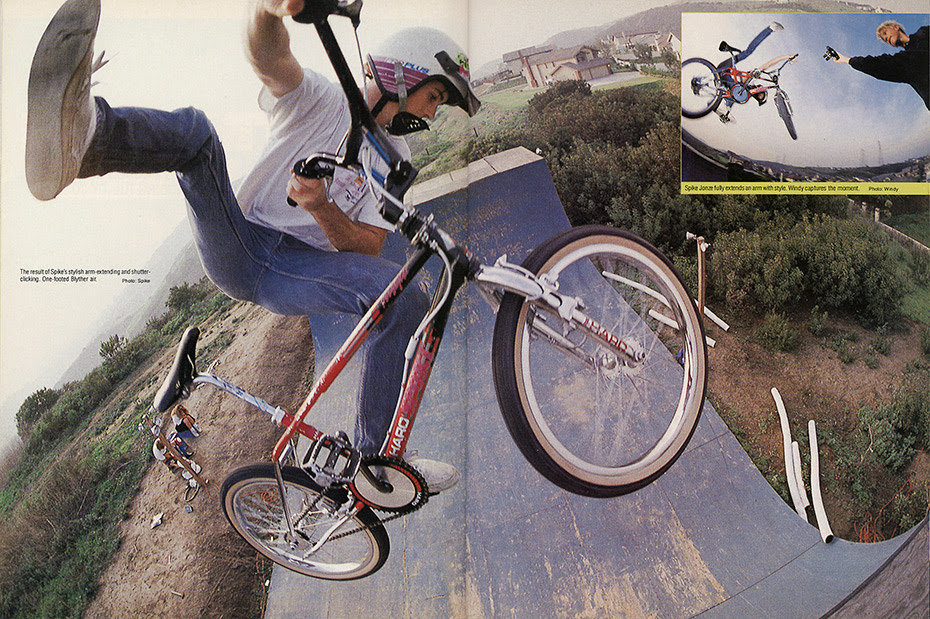 I would analyze the photos trying to read what the stickers were on a pro's helmet, or why his bike had grip tape on the seat post. I loved all the extra crap that might be caught in a picture, like three pitbulls in a dog pen next to Mike Dominguez's massive, back-yard half pipe. Freestylin' wouldn't crop that out, they'd just leave it in.
At the bottom of each photo the rider and photographer were usually identified, so I could start to recognize photographers names. Names like Gork, Lew or Spike Jonze. They sounded like members of a punk band. Spike and other photographers were experimenting with new camera techniques as they went along. Sequence shots are pretty standard now, but at the time they were pretty cutting edge.

Spike started working at Freestylin' in 1987 when he was seventeen. He wrote articles, shot pics and was an associate editor.  The style of that magazine helped shape my idea of who I wanted to be. Coincidently I discovered this magazine right around the same time my friend Scott played me a tape of the band, Agent Orange, and another friend, Jessica handed me one named Husker Du. If my choices were the clean cut, jock look of BMX Plus or the torn t-shirt punk look of Freestylin'. I knew which direction I was going.

So, life moved on, I left home and abandoned my giant stack of bike magazines in my parent's attic. I was still messing around on a freestyle bike in Denver, but it would soon be sold for a mountain bike. I was a huge Beastie Boys fan at that time, and I caught a story about the 1994 Video Music Awards.
The Beasties were outraged that their Sabotage video hadn't won any awards. Somewhere in the story it mentioned the video was directed by Spike Jonze. I heard that and thought, Hmm, is that the same guy who shot all those great bike photos.
Flash forward to 1999 and I watched the film Three Kings. It starred Mark Wahlberg, George Clooney, Ice Cube and...Spike Jonze? Again, I thought, Is that the same guy?
You can probably see where this is going. Yes indeed, I'm talking about the director of 'Being John Malkovich, 'Adaptation' , 'Her,' and 'Where the Wild Things are.' He's directed iconic music videos for Fatboy Slim, Weezer, the list goes on and on.
Other articles have already covered this connection. Either one is worth checking out because they have some great shots of Spike riding, he was equally skilled on a bike or skateboard. Be warned though, opening old bmx articles and photos is a deep, deep rabbit hole of awesomeness. Skaters and bikers alike are proud to claim Spike as one of their own and honestly it makes sense to me that these thrill sports would nurture creative thinking. Success in skating and biking isn't measured in the number of points scored. They are more about, how can you ride off that loading dock in a way no one else has done before? Spike just carried this concept with him into the bigger world, and I'm grateful that I was exposed to his creative influence very early in my life.

April 15, 2020
I knew John Biro. I was lucky to meet him early in my short time in that part of the mountains. At his service lots of people told great stories about him. Lots of people knew him better and new him longer. My Biro story is just a tiny scrap in the mountain of stories that could be told about him. But I want to tell it anyway, because I feel like one day his boys might be looking for new stories, little stories, everyday stories, about  their dad. I don’t want to tell a story about myself, I want to tell a story about Biro, but I just happen to be in it.   I first met Biro on his birthday in 1998. Shane and Marvelous Marvin led me up to his cabin. I had been sledding up Kebler before, and into Robinson basin. But I had always skirted around the townsite. The town site was forbidden, unless you had a reason to be there. I was excited to finally enter this mysterious place where smoke trickled from the chimney's of odd little cabins covered in snow. I stayed all day at the party a
3 comments
Read more

June 19, 2020
Bikes are so hot right now! The global pandemic has brought massive popularity to a thing that many of us already knew about. Bikes are cool. Riding Bikes is fun. It's conceivable that social distancing has killed many sources of recreation that people had come to rely on and enjoy. Obviously bowling isn't a sport, but it did provide entertainment to many people, and now bowling alleys are closed.    It would have been great if bowlers had taking the sport back to it's rough and tumble roots. I'd be interested in watching some gritty, underground 'street bowling.' I picture it in an abandoned warehouse run by bowling gangs. But that didn't happen. Instead everyone in the country said, "Hey don't we have some bikes still in the garage? We should ride those." or even better, they said, " You know, I think I'd like to try mountain biking, that looks fun!"   And so the Golden Horde was unleashed on an unprepared cycling industry. B
3 comments
Read more

November 10, 2019
A few years ago I convinced several friends to join me and ride The Gold Rush Bike Rally. This is a great ride that took us up gravel roads, over rough, rocky singletrack and then dropped us into winding canyon roads above Boulder. We rode a combination of mountain bikes, commuter and cyclocross bikes.   A funny thing about cyclocross bikes is that they continued to use cantilever brakes  long after that style of brake had gone extinct on mountain bikes. This post is about those brakes, and why they should be extinct.    The pavement felt fast and smooth after beating ourselves on the rocks and ruts of the Switzerland Trail. My brother was riding an older cyclocross bike and he started hauling down the hill with the rest of the team. In an instant his back tire violently blew out and he skidded to the side of the road with his foot down.    The team all gathered round and quickly had the wheel off his bike. The sidewall of the tire had a thin crescent shaped slice in it, and
Post a Comment
Read more