The day I broke my Camp Four Coffee mug was a sad day, but it did lead to an hour of reminiscing about Crested Butte, so it wasn't a total loss. The day started like any other. I had my thirty minute drive. I took off my Vans and put on my work boots. I scrolled through my Pandora channels, settling on King Gizzard and the Lizard Wizard channel. Then I pulled the trusty mug out of my tool box and gave it a wipe.

With my bandanna secured over my face I headed towards the little alcove where the Bunn commercial coffee maker sits simmering away with a full pot of Folgers. It's not good, but it is coffee. 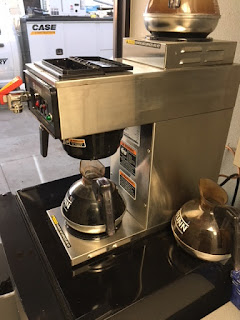 I took a shortcut outside and there they were. The Colorado Rocky Mountains. The mountains are always in view, sternly glaring at me, judging me for neglecting my duties. The mountains know that my purpose on earth is not to propel the commerce of American society, the mountains don't care about that. The mountains are gods who demand to be worshiped. I have to visit them often to stay in their good graces, or else they will be vengeful. 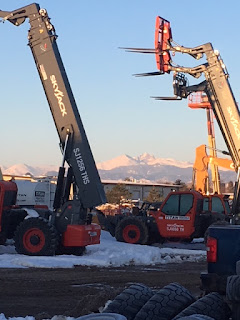 I took a moment to stare  at the mountains in awe and pay my respect. My thoughts drifted to the little town at the end of the valley. Not behind these mountains, but behind the mountains behind these. I thought about Al's coffee cart and the coffee I used to put in this mug. Then it slipped from my hand and hit the ground, breaking the handle off. 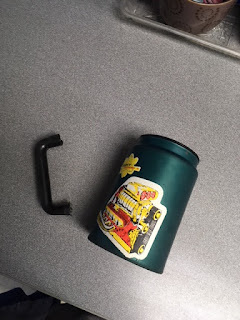 The first time I heard about Crested Butte was on a chairlift ride up the Pali at A Basin. The dude said, " You like these steeps, you gotta ski the Butte." So that was where I headed. I've gotten  a lot of good advice on chairlift rides. I entered the town like many before me and many after, car camping up Gothic, then returning to the pay phone often to hunt down housing and a job.

I bought the mug for economic reasons, and because it was very cool. I think the standard coffee drink was called an Americano, but it was also the only drink. I would just set the mug down and Al would refill it for a discount. I imagine he would have made other drinks, but as far as I could tell everyone just got the same thing. It was all I could ever want. Al would clang around for a few minutes, tapping out old grounds and adding fresh. I always got a few lines of friendly small talk, then the stainless steel monstrosity would hiss behind a cloud of steam. Then he'd hand back my mug full of rich brown nectar.

After a couple years I felt I had reached full local status. I'd ride my vintage cruiser to the coffee cart, get my refill and then pedal over to Mountain Auto. All bosses have their own style and my boss Pete had a ton of style. He was also a pro-level Crested Butte partier. Some late nights I would be staggering out of the bar and I'd see him headed in, just getting started.

So that's how I'd enjoy my coffee. Sitting out front of Mountain Auto, waiting for Pete to come open the door and the day to start. He might be ten minutes late, or forty, I didn't mind, I had my coffee. And Camp Four is coffee that really should be savored. Pete gave me the big engine sticker for my mug, the inspirational writing that was on it originally wore off, but the engine has lasted all these years. The mug stays at work and I use it everyday. 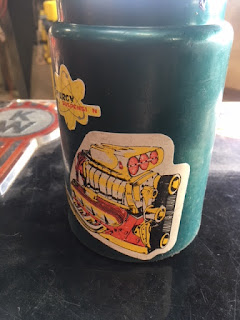 I didn't stay long in Crested Butte, I wasn't meant to. I think some of us are meant to function sort of like missionaries. We live in C.B. until we learn the way and then we are supposed to go back out into the world and share what we've learned. When I ski or ride my bike I'm showing the world how they do it in C.B. When I share drinks and stories at a bar or campfire I'm doing it like I was taught in C.B. When I engage with other humans, I do it like I did in C.B.

P.S. The mug works just fine without a handle