I limped into work on a Monday and my buddy asked what I did. I said, I slipped my pedals doing an ET. He said, The kids at BMX are always doing those. Why’s it called that? Doesn’t it stand for something? 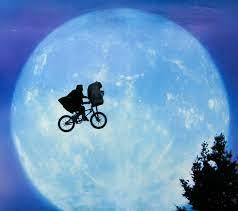 Well,  dear readers, ET does in fact stand for Extra Terrestrial. Today I’ll tell the tale of how the cute little alien may be unknowingly referenced at your local dirt jump spot or bike park. First I’ll describe the trick. This is a pretty easy trick and I encourage every rider to try this for themselves. You ride off the lip of the jump and then once you are in the air you start pedaling again,  as you begin to drop, stop pedaling, set your feet level and stomp the landing

For me a good one is two or three pedal strokes. Blake from GMBN  says his record is six full cranks. That's a pretty big jump. I can also do a half a crank on a really little jump or roller. I think these are a fun, under rated jump. This is a trick impossible to capture in a still photo, it just looks like a dead sailor. Basically you stay in the position of a dead sailor, but the cranking pedals looks pretty cool and feels good. It's a great trick to throw while you are still warming up and feeling out the jumps.  Or if you want to add a new dimension to a big jump or drop.

The jump doesn't take much commitment and it allows a large window for mistakes. When you start  jumping, you think you can only jump and land with your feet in attack position with your favored foot forward. The more you practice ET's you learn that you can actually land most jumps with your feet in almost any position. Seriously, opposite foot forward, one foot up one foot down, it's a little awkward, but this skill can help you land the jump when you really need it. Landing with pedals funky will be required if you ever start throwing no-footy's.

ET's are a little trickier on my trail bike than my dirt jumper. The reason is gears. The first time I tried an ET on my YT I had it all the way in high gear. So I hit the jump just fine and when I tried to pedal it was WAY harder than on my Dj. I think it threw me forward and I barely survived. Now if I want to do one I need to plan ahead and pick the correct gear beforehand. But, since I don't dirt jump often enough, I forget which is the ideal ET gear. I think this is why slipped my pedals and crashed. I chose too low a gear and when I went to spin there was almost no resistance, so that threw me off. It's a real Goldilocks situation.

The name of the trick is a reference to the 1982 movie ET. In the movie a kid is trying to get away with an alien riding in the basket of his dope Kuwahara BMX bike.  The alien uses its powers of levitation to lift the bike into the night sky. As they sail through the air, the kid continues to pedal, hence the trick. I know this  sounds pretty unrealistic, a basket on a BMX bike, but that's what he had. 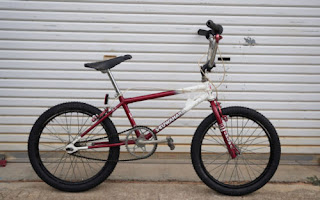 My friend at work is 10 years younger than me, so the movie ET was not something he was familiar with. I love that the name lives on as a dirt jump trick.

Technically, this wasn't the first time this trick was seen on film, it was also featured in 1939's Wizard of Oz. Miss Gulch is pedaling as she flies through the air too. 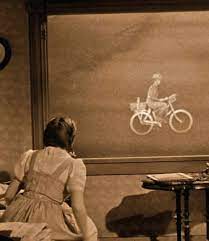 Maybe the next time someone asks what the trick is called I'll say it's a Wicked Witch.