January 25, 2020
The process of using high voltage electricity to attach two pieces of metal together was first developed in the ancient land of Eternia by a master swordsmith named Heman. Heman would craft the blade of the sword and the hilt as two separate pieces of refined steel alloy. Then he would set the hilt onto the blade and hold it aloft during a lightning storm. His muscular build would serve as the ground point for the current flow and through this process, he would create a metal arc weld, fusing the two sections into one solid piece of sword
. 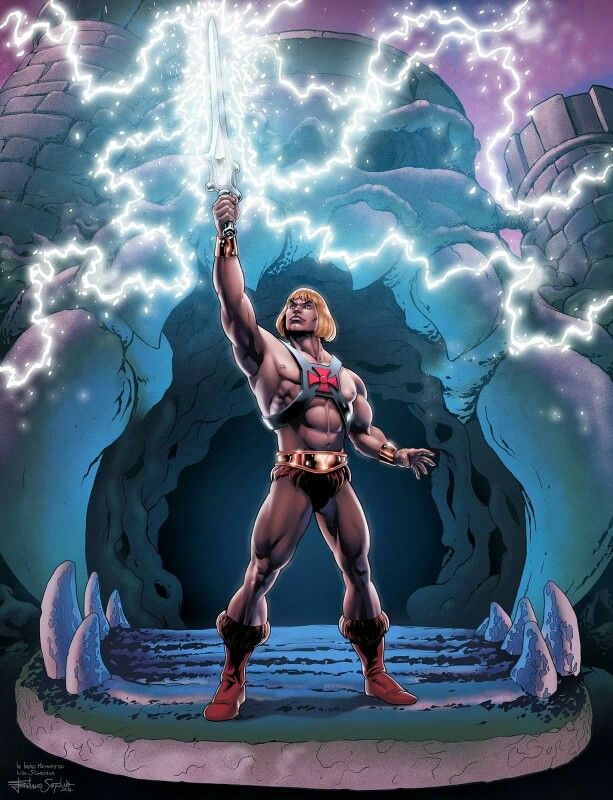 Ok, some of that might not be true. But, it was more fun than writing this... Twice upon a time, all the major nations of the world engaged each other in bloody conflicts that spanned the globe. During the second one of these conflicts all production of fun things like bikes was halted and manufacturing focused solely on the assembly of weapons. In order to build bombs and torpedoes faster, new techniques for electric arc welding were invented.
Eventually the bombing and torpedoing slowed down and the new welding equipment could be used to build bikes. If you're not riding carbon fiber, then your bike has got some welds on it whether it's steel, aluminum or titanium. Unless, it's a lugged bike, but I'll get into that later. I'm not going to cover the technical mumbo-jumbo of welding because that's very boring and full of acronyms. I'm not even going to really cover the technical side of bike building, because Sheldon Brown did a great job already.
I just want to talk about welding, and the welders who weld. I did find a small company that's using robotic welders to build bikes, but all the rest are still welded by hand. If you've never tried it, welding is horrible, painful, beautiful and elegant. It is  a violent art. Imagine someone writing calligraphy with a burlap sack over their head being bitten repeatedly by a chihuahua. At work, when I'm given an overhead welding job, I like to joke that I'd rather set myself on fire. It's a joke because when I'm overhead welding I often set myself on fire. But when you're not splattering drops of liquid metal into your boot or your ear, or your crotch, you can create something truly amazing. A weld is the glue that joins two materials together. If done right, you can draw a little of both parent materials into the weld and the final result is a combination of all three materials coming together to form one. To create a bead of weld, the welder has to repeat a small C shaped motion with the flow of liquid metal. Sitting in the C  is a small puddle of the hottest metal. Since it is immediately cooler on the three sides of the C, the puddle pours out the open side. Then you make another C and the puddle moves further. The bead can go on for as long as you keep pushing the puddle.
It sounds easy enough, anyone can put a pen to paper and make a row of cursive C's that are all equal size and equally spaced. That's really the motion that it takes to make a perfect weld. Except in the real world, challenges arise that complicate that perfect motion. One, is that, bike frames aren't flat. If every weld entailed laying bead on a flat horizontal surface, even I might make nice welds. Instead welds are often required to run uphill, downhill, and around obstacles and corners.To avoid welding upside down (overhead welding), bikes are built in jigs that can be flipped over as the bike comes together.

A welder wants to make long continuous beads in order to make the strongest welds. Each time a weld stops and starts there is potential for a void to form in the gap. As the metal is stressed, a void is the point where a crack will start. When a bike builder is welding tubes together, ideally they want to start the bead and not stop again until they have come all the way around the tube back to where the weld started.

I think each weld made by hand  is organic and unique. It's like the welder's signature. A professional welder probably feels differently, for them it is just the daily grind. I found an MTBR post here explaining that it takes less than thirty minutes to weld a frame. Sixteen frames a day! And welders aren't that different from anyone else punching a clock. I mean, I've known a few and they are different, it takes a special person to stare at a blinding light all day and breathe noxious smoke. But I'm saying all the laws of workplace productivity apply to frame building just as they do anything else. Is the first frame on Monday morning really any good? How about the last one made before lunch break? Or the last one made on Friday afternoon?
I worked with a welder who built high performance airplane parts. He was in his fifties and sported a ponytail under a leather beatnik cap and a beard. He'd crank up a Dead bootleg and lay down perfect TIG welds all day long. I think once you reach a certain skill level, all your welds become consistent


One way to clean up a weld is to grind it smooth. Grinding is a time consuming and labor intensive extra step. But it sure looks good.

I've been trying to make some trail signs by welding the names onto old shovels. It's kinda tricky since the shovels are really thin and rusty. Just as I get the bead hot enough that it's flowing decent, it starts to burn holes through the shovel. For this one I made all my letters with one pass, then I left the weld as it looked. 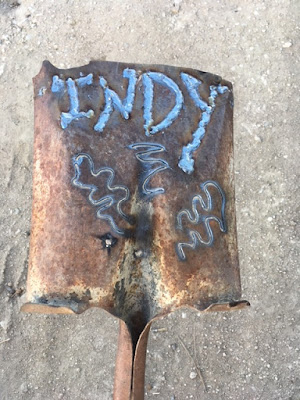 And for this one I built the bead up really thick, and then ground the top flat. 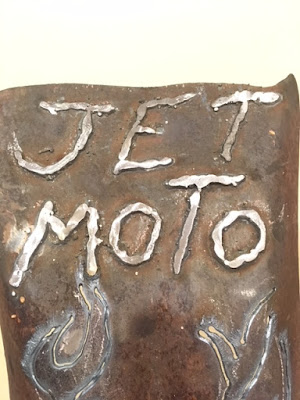 If you read this post in Weld County while listening to the Neil Young 'Weld' album something amazing will happen. At the very least you'll hear some great music.