Working in a bike shop part two: The Customers

December 22, 2020
I wrote this in the middle of summer when the bike madness was sweeping the country. I was helping at my neighborhood bikeshop tuning bikes. Then, when big orders would come in at Longmont Bicycle Company I'd bring my girls in after-hours and together we would unbox and assemble the new bikes. I'd pull bikes from the box, the girls would cut off the shipping material and put wheels on. It was a great experience.
But when the summer was in full swing, bikes and parts were in high demand. People got a little crazy and I came home and wrote some of it down. I didn't publish it at the time, because it sounded pretty negative. Now it just sounds kinda humorous. And I'm no longer annoyed by some bike people, now I love everyone. So I present you with a small glimpse into world of a small bike shop in mid-summer 2020... 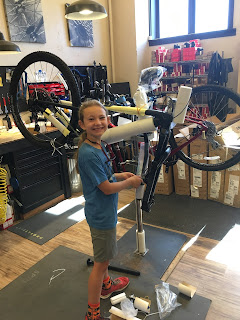