December 24, 2020
Everyone has done it before on some scale. Popping off the side walk onto the street is a drop to flat. But let's quantify this and say that a drop is a mandatory air. It's past the size where you could safely roll over it. Start at three or four feet and just go up from there. Behind my elementary school was a retaining wall of white limestone. It was probably about four feet high. We rode off of that on bmx bikes and landed flat on grass. Not because it was fun or it felt good, but just so we could say we did it.
That last sentence sums up all drops to flat. I know I still do them way more often than I should, on a bike or skis. Drops to flat are like choosing to watch an 80's action movie, you know what you are getting into. It's a cheap thrill and you may regret it. You're not going to find fulfillment when you land flat. If the drop is big enough it can even be damaging to you and your equipment.
Yet, they still exist. When I was starting out jumping on a bike, I was  desperate for any way to get that thing into the air. Naturally occurring jumps are pretty rare, but natural drops to flat are everywhere. I dropped off loading docks, and flatbed trucks parked next to loading docks. I dropped down stairs, off of roofs, if I could get one of my friends to watch, I was all over it.

The trick of dropping to flat is understanding that Speed Defies Gravity. I know this is true because I've had multiple bike seats try to convince me of this.


Your bike seat has no reason to lie, it's looking out for you, so you gotta trust it. SDG is the only formula you need to know. If you are going fast enough when you hit the ground, you can magically dissipate the force of impact without landing in a transition. It's like if I'm picking a bowling ball off the rack at the bowling alley and it drops three feet to the linoleum it will hit with X amount of force. But if I lob it down the lane and it stays three feet off the wood for the first ten feet, when it touches down it will have less than <X amount of force because SDG.
There are two positive things I can say about drops to flat. One is that they are plentiful. There are way more of these in the world than there are drops to a transition. Another nice thing about dropping to flat, is that if you crash, you've already gotten the worst of it. If you are dropping to a nice steep landing and you crash, that could just be the beginning of a long tumble down the steep incline that you were aiming for.
It could be that I have an issue with drops all together. Compared to jumps, I just feel like I'm being cheated with a drop. A jump has three distinct sections, the ascent, the apex, and the descent. During the ascent your bike leaves the earth and climbs into the air. You can feel the acceleration and the pull of gravity slipping away.
The apex is the sweet spot, in my opinion this is the reason for jumping. During the apex you and your bike are floating through the air weightless. Your bike is traveling at the same speed as you, so now is the time to remove your hands, feet or both. 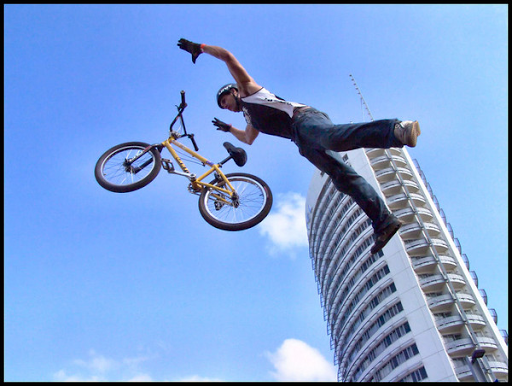 An airplane can perform a similar maneuver called parabolic flight, when the plane is at it's apex everything in the cabin becomes weightless. Please click that link, I'll wait..

The parabolic flight diagram explains dirt jumping perfectly, just imagine the blue part is the gap between the jumps. After the apex, you nose your bike down and gravity regains it's grasp on you, pulling you back to the dirt.
So here's my problem with drops. You are riding along either a rock or a diving board and it just ends.. 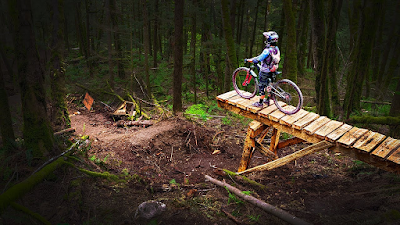 ..so you are entering the air right after the apex. You just missed the fun part! All you get to experience is the return trip to earth. Drops and jumps can be roughly the same height, so the risk of injury is all the same. You are taking the same risk as jumping, for only one-third of the experience. And not even the best part.
So you people do whatever, keep stepping up to bigger and bigger drops.

I'll be over there on the jumps.
P.S
The real reason I don't like drops, is because I'm not talented enough to throw tricks off of them very well. I go into greater detail about this in my post about concussions.