November 18, 2019
Three years ago I purchased a Giro Chronicle helmet. I love this thing, its got a nice wide visor and plenty of vents. It fits snug, never bounces around, and the rear wraps around low to protect the whole back of my melon. The very best thing about it though, is a little round, yellow sticker that says Mips, short for Multi-Directional Impact Protection System. In case you haven't noticed, every helmet for every sport is starting to incorporate this new tech to help prevent concussions. I first noticed it in a ski shop several years ago and asked the salesperson about it. She waved her hand across racks of helmets both with and without Mips, "All of these helmets will save your life," she said, "But the Mips helmets will keep you from getting a concussion." 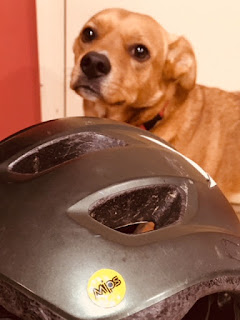 Having already logged a few of these brain killers,  I was ready to try anything to prevent another. So I hung up my trusty, but Mipless, Bern helmet and threw on the Giro.
In Mat Hoffman's book, The Ride of My Life he discusses how pro ramp riders dealt with concussions back in the days of big halfpipe riding. It centers around an incident when a pro named Simon Tabron crashed in a competition and knocked himself out. After he came to, Simon insisted he would finish the competition despite warnings from his friends and medical staff. As you might guess, he dropped in for another run, only to crash again and sustain much worse injuries. After this happened the community of pros established "Tabron's Rule." The rule declared that after a knock out you are no longer fit to determine your own ability to continue. If one of your peers calls the rule on you, you need to obey because they are only doing it for your own good. Hoffman describes the frustration of having the rule called on himself, and the gratitude  he later felt towards his friends for protecting him from further injury.

Unfortunately, I have friends who don't read books, so I experienced a situation like this much differently. My friend Logan and I were having a session at a local road gap. Ok, it was actually a golf cart path gap, which doesn't sound as gnarly, but the physics are the same. Back then, I had pinch no-handers completely dialed on dirt jumps. I could approach the lip of a jump, firmly squeeze my seat between my knees and just let go of the bars as my wheels left the ground. I could do it all, clapping hands behind my back, or straight out to the side like an eagle, hands over my eyes, jazz hands, you name it. 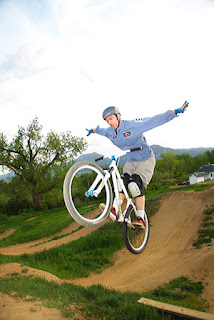 So, I thought if I could nail a no-hander on a jump, a straight ledge to a drop shouldn't be much different. Turns out, it is quite different.  I pedaled hard towards the edge, sailed over the cart path, pinched the seat and let go. Then I felt the seat slip away from my knees as the whole bike tipped away in front of me and I fell flat to my back on the hard ground. My cheap, skid-lid helmet hit the ground hard and I saw stars. I didn't lose consciousness, but I definitely had my bell rung. I picked up my bike and found a severely tacoed front wheel. "Definitely time to call it a day." I thought.
"Aww come on!" Logan said, " I've got a spare wheel right in the car for you! Let's swap it out and keep going. " Long story short, I did keep riding and got myself even more hurt.

The truth is, someone who's suffered a concussion does need help. Whether this is a riding partner or some rando who goes down hard at Valmont, you might be the first person to arrive at their side. The person coming to is like a computer slowly rebooting. Their brain may struggle to perform even the most simple functions. The best you can do is to help them remain calm and slowly let them understand the gravity of the situation. This can be very frightening and confusing.
My friend Bucky helped another dirt jumper who had been KOed. He described the experience  to me.
"The main thing through it all was reassurance and making sure he knew everything was going to be alright. No matter how many times I had to repeat myself. His short term memory loss was incredible. It would take a matter of seconds and he would ask the exact same questions. The onset was quick too. We were headed back up for another run after his crash because he said he would be ok then next thing I knew he was asking what we were doing and how did he get there. But we would answer his questions like they were the first time we'd asked, and kept on letting him know everything would be ok. I also remember letting him know where we were headed because we wanted to get him checked out at the hospital. Having short term memory loss like that is super scary and you have to wait to laugh 'til after he's healed before you can all laugh about it together."
Years after my crash, Logan came to visit in Longmont. I had been telling him about the amazing skate park we had at Sandstone. He was a DH racer and a dirt jumper, but he was interested in trying a skate park. We unloaded bikes and rode into the park, I saw some other riders I knew and stopped to say hi. Out of the corner of my eye I watched Logan take one lap around the perimeter of the park and then drop straight into the deep end of the bowl at the northern end of Sandstone. As I watched this happen I thought, "Either he is really good, or he's in big trouble." That bowl is about 12 feet deep with over-vert transitions peeling in from all sides. We ran over and looked down. He was all tangled in the bike, knocked out cold in an expanding pool of blood.
He woke up as we were climbing down and started extricating himself from the bike. We placed a  tshirt against his broken nose to stop the bleeding. Then we got him to lay down and stop moving. One of the other riders who was there calmly ran him through a series of questions that helped straighten him out and prevented shock from setting in. She asked him things like his name and date of birth, which he didn't immediately know.
Soon, Paramedics stabilized him on a backboard and pulled him up out of the bowl. By that time his answers were becoming more clear.
I'm not sure how to sum up this post, sometimes I lose focus and can't remember the point I was trying to make. Basically there are two important things to remember about concussions. Upgrade to a helmet with Mips technology, maybe you can prevent a concussion in the first place. Next, be ready to help someone who's suffered a concussion. They could be frightened and confused. Lastly, don't be afraid to invoke "Tabron's Rule." Even if the concussed rider seems to be ok, a few more runs after a bad crash just aren't worth it.