I think my problem is that I keep trying to write a post with a bunch of opinion, like, why I hate Strava. But, I always run out of steam because I’m just starting a one sided argument that no one really cares about.

Instead I’ll just tell true stories, the way they happened. I’ve been riding a bunch at Left Hand Canyon. This makes the fourth year I’ve been indoctrinated into the cult of Left Hand. Being in the cult means a day of riding elsewhere is a day wasted. I know the front range has lots of options, and people invite me to go try new places. I just smile and say, “ Yeah we should totally go ride that other place.” But, I know I’m lying. Riding someplace else local would be a betrayal of the dark powers I worship. The demon gods of Left Hand would know, and they would strike down upon me with great vengeance and horrible anger. And I want nothing to do with that.

Me and the demon gods of Left Hand have been really tight lately. We had a nice wet  spring season. I had many spectacular rides after a recent rain or snow. On days when I found it too wet, I would do trail maintenance. Maybe this helped to get in good with the trail gods. Whatever I did to appease them worked, because they have been smiling upon me.

The trails were running just the way I like them, with grippy dirt and nice solid features. And I was riding them just the way I want too. I’m embracing the fact that I ride differently from most other riders. I ride to have fun and be creative. I don’t ride every trail like it’s a racecourse. I take each run like it’s a slopestyle course. I like to pretend that there is no clock running. Instead I pretend that two commentators are watching my run intently and pointing out each stylish move I pull off or judging my amplitude. 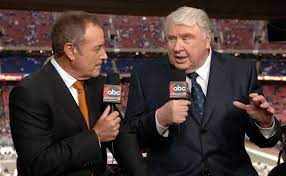 “ Reinholt lands a long, rear wheel drift all the way over that roller, he’s setting up for this next one and BOOM! Into a nose wheelie! Ya, know Ed, I don’t think he even uses the front brake for those.”

“That’s right Steve, he just throws the bike forward and hopes something cool will happen. I don’t think he’s got much control, but it he stuck it somehow.”

“Now he’s heading for a kicker that comes down into a really flat landing,  he’s throwing in some quick pedals to build up speed, what’s he got planned for this one?”

“ Oh a solid X-up! Truly a remedial level trick, but you could hear the tire buzz off the tip of his toe and that shows that he did indeed take it as far as he could before straightening out his bars”

“Reinholt really putting a lot of effort into a small pile of dirt forming a very mediocre jump.”

If I end up with a crew ready to drop in, I usually announce that if anyone has the need for speed, they should go ahead of me. Sometimes a rider will say, “No, I want to follow you, you’re fun to watch.” It does tickle my soul for a moment, but I know that it really is for entertainment purposes only. I’m fun to watch, but they don’t want to ride like me, speed is king.

There are special occasions, like riding with some old friends from Denver. They showed up and said, ‘Take us to the fun stuff.”  At Left Hand I have a small list of jumps that I only hit when I’m riding with someone, on this day, all those jumps were on the table. The biggest jump we hit was on Ginger Booty. The jump is 30 feet from the lip of the takeoff to the top of the landing knuckle.

I knew the jump required some speed so I came in hot with Jesse on my tail. We sailed over the knuckle, over the entire landing transition, and landed flat somewhere in the 40 foot zone. I heard a nasty clunk as all my suspension bottomed out, then I looked back to see Jesse smiling as he did the same thing. One of the other guys wanted another try, so we hiked back up and did it again, with the same results. If I want to keep hitting this I need to turn my speed down just a little to try to catch some of the landing tranny, since that day, my cranks keep getting creaky and loosening.

Sometimes I need to give my YT trail bike a little break. In an amazing twist of fate I now have my youngest daughter begging me to take her to the skatepark. She has joined the Boulder County Devils Roller Derby team and wants to skate anywhere anytime. I wore inline skates the first couple times with her. It’s fun, but I’m not an inline skater. I don’t know how to crash on skates. I need a bike. So now she skates and I ride my dirt jumper.

Holy Shit, do I love riding park! I love the scene and the culture. I love that everyone’s effort is fully on display. In so much of society we can just talk about our actions. At a job or at a party you can tell people how hard you work or what you’ve accomplished. But at the skatepark, no one needs to speak a word. We can all see who is holding back, and who is pushing themselves to new challenges. Who is afraid, and who is going to keep getting up after repeated failures. 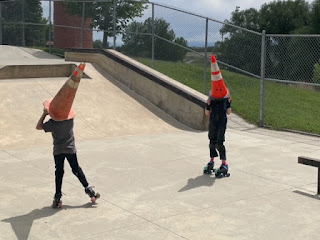 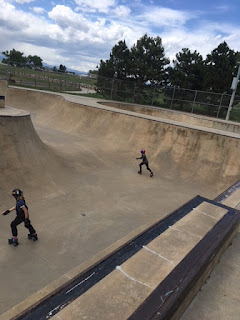 That’s where we were under a blue sky afternoon. The two skaters Jet and Roxy were messing around and I was chatting with the other dad. He’s a hotshot programmer who works with start up companies. Apparently this career makes really good money when things are rolling, the downside is that things can quickly fall apart. He was telling me that he had just been let go on Friday from his current job, this was Sunday. He didn’t seem worried at all, he got a severance package, he had money built up for the occasion. And his biggest decision was which company to sign on with next.

Risk is a funny thing. I’ve worked at some sketchy places, but I don’t think any of them were ever on the verge of folding up in the course of a month. To him, start up companies, were an acceptable risk, just as bikes are to me. That day I was having a pretty good sesh, all my old tricks were coming back. The only other rider shredding was an  skateboarder around my age. He was hitting some big ollies off ledges and doing some nice grinds. I felt if he was bringing it for the skaters, I needed to represent for bikers. I started blasting some big airs over the box and linking together some good lines.

As I mentioned I’m really digging nose wheelies. That day each one felt better than the last, so I I started to push it a bit. I was right near the girls and the other dad when I finally went over the bars. I think it was a pretty good crash, I tucked and rolled. Came up smiling with a scraped elbow and a banged knee. Unlike on skates, I’m pretty good at crashing a bike.

Injuries from having fun serve as nice mementos while trekking through the rest of life. I like being at work, immersed in some big repair job, and I bump something against my sore knee. First I’m hit with a sharp feeling of pain, then I remember how I got that bruise and I’m reminded of that fun afternoon at the skate park.