November 27, 2019
Early in the fall I was at a bbq talking with Austin and he mentioned he didn't have a bike. My ears perked up. "What are you looking for? Just something to cruise into to town?"
"Yeah, something really simple ya, know, like what Sam has."
I started to grin, Sam has a single speed road bike, those are fun to build.
"I got you man," I tapped my beer bottle against his, "you'll be riding before spring time."
I love building junk bikes for people, it's like my super power. The thing is, after you've built enough junk bikes, people start to think of you as the guy who builds junk bikes. Then other junk bikes just start coming into your life.
So, it happened that I had two mostly complete 70's road bikes hanging in my barn. Rick from Bike N Hike had given them to me a few years ago. I used to pick through his pile of junk bike trade-ins and bikes that were abandoned to the shop. These bikes represent some of the finest steel to ever roll off the island of Japan. The yellow one is an Adzuki and the blue one is a Miyata. 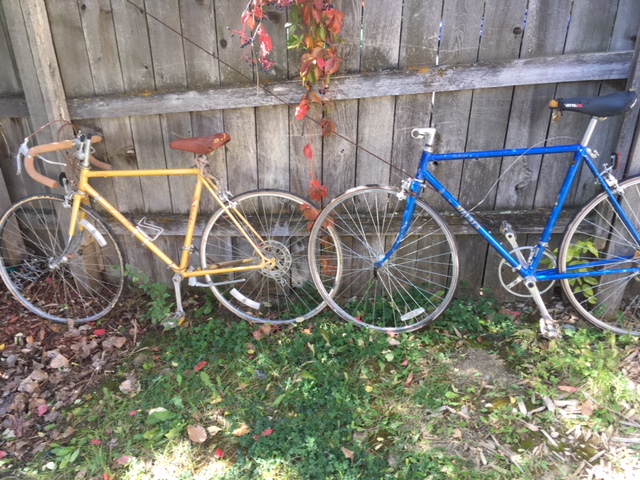 Austin was excited and said he liked the blue one, so I began the build.
All the bearings had seen decades of neglect and were feeling pretty crusty. 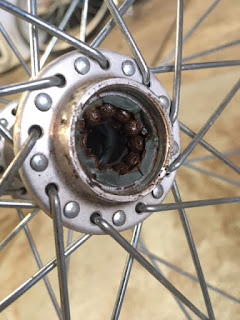 I cleaned up the bearings in a little gasoline.

Then I assembled the bottom bracket and headset. Since the bike was going single speed, I wanted to use the rear wheel with the bolted axle instead of the one with the quick release. So I removed the cassette. 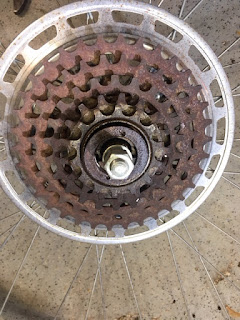 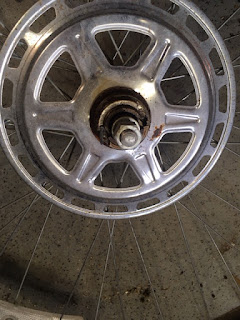 I stopped in at Longmont Bicycle Company and the helpful staff found me a freewheel, some tubes and a nice set of 700x38 commuter bike tires. 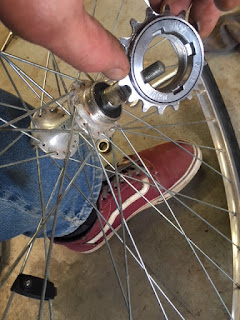 I pried the nasty old tires off and cleaned up the rims. The chromed steel rims shined like a mirror. 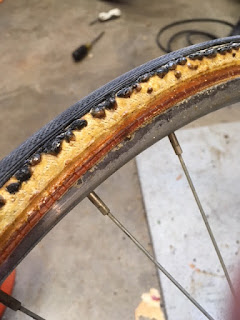 I tried to install a tire and quickly realized I had made a mistake. The chromed rims were 27 inch, this is an older and obsolete wheel size. I had no desire to start searching  for 27 inch road tires, I have a hard enough time finding  26 inch mountain bike tires. So I turned to the other set of wheels. They were aluminum and probably a few years newer than the steelies, plus they were the correct size for the tires. I had to drill out the air valve holes to fit the scheader valve tubes on, but the bigger tires looked great. I pulled the heavy chunk of gears off the the rim, but I still wanted to use the solid axle. Luckily the ball bearings were the same size so I could swap the axle hardware into the other rim.
I trued both wheels a little and adjusted the front brake. Ryan at Nulife Cycles cut me a piece of brake housing that I needed for the rear brake. The new housing slipped into place and I got both brakes working decent. These pedals are an interesting style. 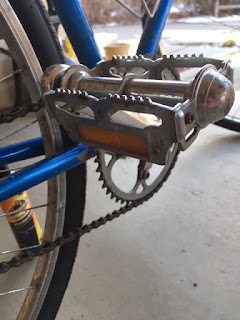 It's like a guy on the design team said, "Hey, we can save weight by only putting grips on one side of the pedal!"
And his partner replied, "I like it! but how do we make sure the grippy side is always up?"
"That's easy! We can add weight to the other side so the grippy side is always on top!"
Then the two guys did a high five and a complex 1970's hand shake sequence that ended in a finger snap.
The bike was coming together, and as much as I like the foam hand grips, they were torn up a bit. 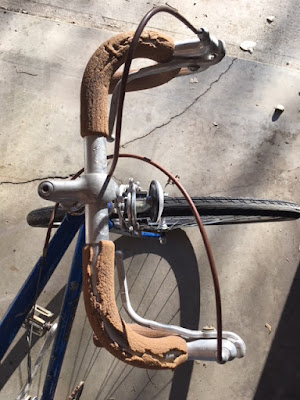 I gave it my best shot at wrapping the bars with new tape. As a dirt jumper and trail rider I can't say I wrap a lot of bars. Hopefully they last a while before unraveling. 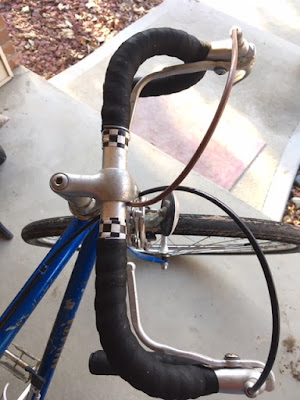 The water bottle cage and over-sized reflectors helped complete the look I was going for. Finally it was time for a ride. 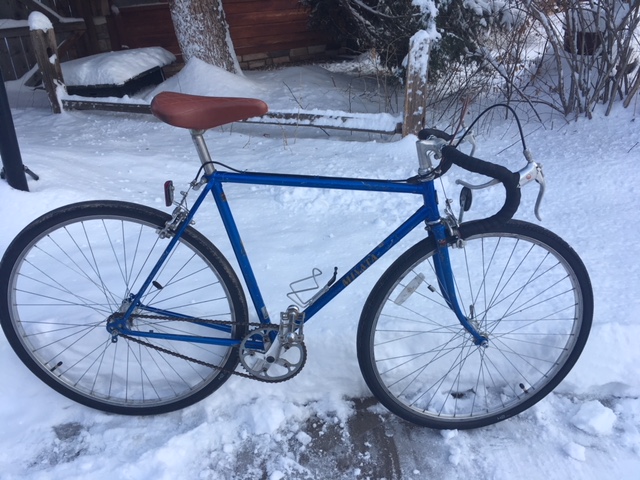 Despite the steel frame, bigger tires and a seat with some padding, the bike still transmits every sidewalk crack straight to your spine and fore arms. But I should have expected that. The frame is nimble and easy to throw around. I didn't see what the front gear is, but it's fairly large. As the hills got steeper I was standing up and setting my hands on the brake levers. But for cruising along the gear ratio is just right and it leaves you the option to really go fast if you want to. Ideally the pedals would have some nice chrome and leather toe clips, but this bike is going to be pacing kids around Collyer Park, not delivering packages across Manhattan in 1983.
I'm really glad Austin was open to this style of bike, The simplicity means the bike should be ready to go every time he needs it. And the style is pure and timeless.