You roll up to the light in the bike lane, let’s assume you don’t unclip. Instead you stand on your pedals and gently rock  back and forth in the perfect track stand. While you maintain your balance and look very cool a car pulls up next to you.
It’s not a normal car. The suspension is lowered and the wheels are neatly tucked into the fenders. The exhaust burbles with a throaty deep tone. The passenger side door is primer gray and most of the front grill is gone, in its place is a wide aluminum after cooler.
The driver glances over, acknowledging your killer track stand that is still going. You grin, then the light turns green. The car slips into gear, spools up the turbo and launches away from the light in a cloud of unburned fuel. The tires gleefully chirp as he catches second gear. You pedal away from the light as well.
The car was obviously a modified hot rod. As a cyclist, I bet you don’t think you have much in common with the person who creates something like that, I disagree.
I prefer a broad definition of hot rodder. I don’t think it should only apply to cars and motorcycles. I think you can hot rod any machine, especially a bike. Think about what the very first hot rods were. Henry Ford built the Model A as the world’s first cheap car. Just like a bike, the way to make it go faster was to lose as much extra weight as possible. The first thing to go were the fenders. Take ‘em off and throw them away. Ever seen the klunker bikes that went down Mt Tam or Pearl Pass? Same thing, no fenders.

The Model A was stripped of its hood, running boards and bumpers. What’s the first thing you did to the BMX bike your parents bought you? I pulled off the kickstand, chain guard and reflectors.
Stripping of unnecessary parts is just the first step, next comes the modifications. For the Model A owner this meant replacing the original engine with a more powerful block from a truck or a larger car like a Cadillac.
For a bike this can mean any number of upgrades. It usually starts innocently. The general rule is, when you break the stock part you get to replace it with something better and aftermarket. Or maybe you’re the rider who immediately pulls off your fork and shock before you even ride it. Maybe you send your stuff directly over to Luby and the boys at Dirtlabs for a custom suspension tune... I like the way you think.
Sometimes we are forced to modify our bikes. Shortly after the warranty ran out, the bottom bracket on my dirt jumper broke. I forget the exact details, but it was something like, 20mm and 22mm were the common sizes for bearings...Specialized ran a 21mm. The local dealer wouldn’t even look at it. It became clear that I would not find replacement bottom bracket bearings, I was looking at a whole new crank set up.
The guys at Joe’s Bikeshop came up with something that might work, so I bought the kit and started to put it on. I believe spacers and adapters might have been involved, but finally I installed both crank arms. I gave the crank a spin and...”clank,” one arm hit the frame. So I did what any self respecting hot rodder would do, and I ground away excess frame material with an electric grinder. Viola! 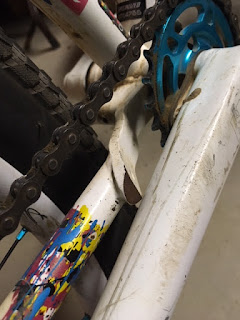 My friend Jeff wanted to build the perfect single speed mountain bike, but he needed more tire clearance. So, he cut away the bridge between both rear triangles.

It’s no secret that people can go out and just buy a fast car. Gone are the days when having a fast car meant that you built it. It’s much easier to just bring a pile of cash to a dealer and drive off the lot in some tire-melting street monster.
So next time you’re rocking a sick track stand at the light and a 700 horsepower Dodge Hellcat pulls up next to you, think about all the little mods and upgrades you’ve done to your ride. Shake your head slightly in disgust and say under your breath, “poser.” Because you have probably spent more time with a wrench in your hand than the car driver who actually thinks of himself as a “hot rodder.”