November 30, 2019
Have you ever been to the Longmont Humane Society to look for a new dog? You can walk down the row of pens and check out each animal. Usually the dogs are a collection of every variation of pitbull mix. But when you see the right one, you know it instantly. Maybe you don’t even read the card that describes all the issues the dog has, this is the dog for you!
That’s how I felt when I adopted my trail this summer. 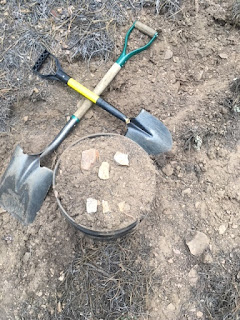 I rode it the first time following a friend. The trail is fast, loose and riddled with fist sized rocks in all the wrong places. It’s nearly a straight shot across a ridgeline, that is mostly descending. And when it does rise up, or level off, you are carrying so much speed, that with just a few pedal strokes you can maintain your speed until it drops again.  This trail is just naturally fast.
After riding it for the first time, I was grinning ear to ear. But, I was also thinking how just a few little touch ups could really improve the flow. That’s when I decided to adopt my trail.
Calling it a trail is probably a little too generous. It’s really a washed out double track that has morphed into a motorcycle trail because of erosion. I’m not out there taking a shovel to some perfectly developed singletrack, or punching in something completely new. I’m trying to tame a wild beast that most riders don’t even consider an actual trail. I say that because this road is a thing you ride to get to other trails. If it were at the bottom you’d call it a get-back road. Up in this trail network, it’s more of a get-to.
So, that’s why I figured I could mess with it and no one would really mind. Repairing this trail is similar to a graffitti artist putting murals on boxcars. It’s only a temporary piece. 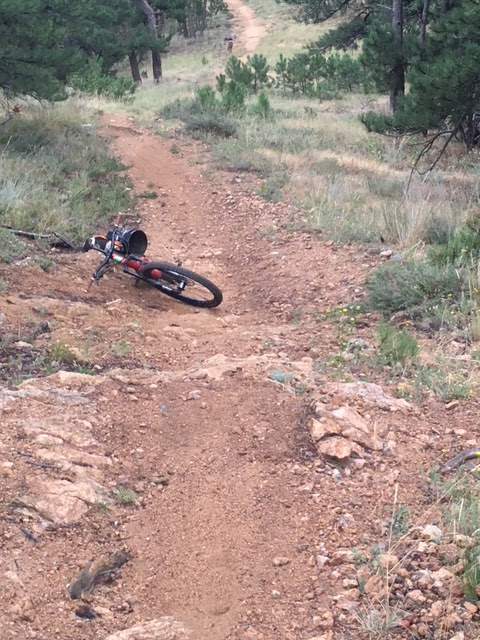 The first thing that bugged me were three distinctive kinks in an otherwise, fast straight downhill.
I filled these in, and the trail smoothed out quite a bit. From there I started walking back up the trail, sweeping rocks to the side. I noticed a bigger rock that I once caught a pedal on and dug that sucker out before filling in the hole.
The trail has a couple of natural jumps that I’ve picked up on. Basically they are just rocky edges, that I hit with a little bit of pop. I decided, if I’m going to be catching air off these things I should at least give them some decent lips. I piled enough dirt on top of each rock to form a smooth transition. The jumps are an optional addition to the trail. Any rider can skirt right past them, but if you’ve got a hankering for some air, you’ll see these little booters as you approach. 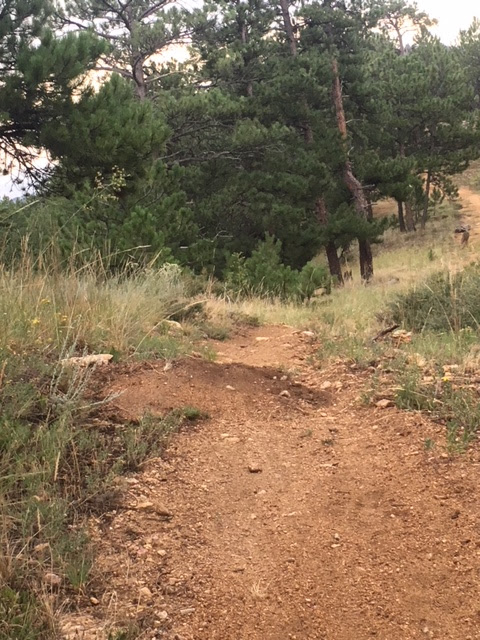 Sometimes trail maintenance means cutting back branches that are starting to slap riders as they go by. Other times it just means kicking loose rocks over to the side. I don't know where the loose rocks come from, but new ones always seem to appear. Some sections of trail lean off camber to the right. Each rainstorm sweeps a little more of the dirt off and deposits it on the side. A couple times over the summer I went up to my trail and filled buckets of dirt from the side and poured them back on the trail.
I dumped a lot of dirt into the three kinks. The kinks are formed by low spots between big rock slabs. They form natural gutters each time it rains and all my dirt gets washed away. I've experimented with filling in the kinks with small rocks and then covering the rocks with dirt. I thought maybe the rain could run through the rocks without washing out all the dirt. It held up for a few storms, but eventually the kinks were back.
Trying to halt the mountain's process of erosion is like Sisyphus rolling his rock up the hill everyday. I'm doing the same thing only I'm hauling an orange Home Depot bucket. It's an exercise in futility. Sometimes my friends will compliment the I've done work to the trail. Other times I can haul ten buckets of dirt back into place and the effect is so subtle no one even notices it. I can't blame them, you really only notice a loose rock when your front tire is bouncing off of it. No one notices if that rock isn't there when you hit that section, you might just think you are really on fire that day.
Maybe you'll make it out to my trail some time, hopefully you find it fast and smooth. If not, hey..the mountain's gonna do what a mountain wants to do..