November 01, 2019
I love the term target fixation. It sounds like something Viper the instructor would be lecturing Maverick and Iceman about at the Top Gun academy. For cyclists, it actually applies more to avoiding rocks and trees than MiGs with a missile lock.
Target fixation is an attentional phenomenon in which an individual becomes so focused on an object they wish to avoid, that they inadvertently increase their risk of colliding with the object.
Every mountain biker has done this to some extent or another. If you're lucky you were just riding along the singletrack, up ahead you saw a big chunky rock in the middle of the trail. As you got closer you start thinking of whether you want go around it on the left or maybe the right. You decide to stick the high line on the right, it gets closer. You watch the rock and it draws your front tire right into it. Of course, you roll right over it, but you didn't go around it like you had planned.
Now let's raise the stakes a little. You've dropped into a forested trail in the mountains. Aspen trees whip past you like slalom gates. A ribbon of singletrack winds out ahead of you with dirt the color of coffee grounds. You feel the flow, you're going downhill, but still pedaling. The trail  is so tacky there isn't a corner you can't make.  You carve past an aspen on your left and catch a glimpse of what looks like carvings in the white bark. You didn't see what that said, but this next one coming up looks like it has carvings too. 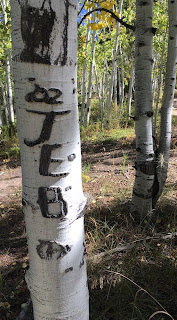 You shift your gaze from the trail to the approaching tree. Its strong trunk springs from the earth at the very edge of the trail. You start to read the carvings as they rapidly get closer. The scars in the tree bark have twisted and distorted over the years. Are the symbols numbers?  or letters maybe...
CRACK!, your pinky and ring finger smash between your grip and the hard unforgiving wood, breaking the small bone in your pinky. The tree spins your handlebars sharply to the right, taking you off the trail and directly into the path of another tree. Reactively, you reach for the brake levers, but it's too late. Your forehead hits the tree with all your momentum. That top-of-the-line helmet tries, but cannot fully dampen the forces that hammer your brain against the inside of your skull. Like a marionette with the strings cut, you crumple to the ground twisted in your bike. Darkness fades in from all sides of your vision like the aperture of a camera closing. Later that night a pack of hungry coyotes finds you.
Anyone who skis in the trees knows that you need to  look at the spaces between the trees. Try to keep the trees in your peripheral vision and focus on the clear path that will get you safely through. I always do this, except for that time I hit a tree at Mary Jane breaking some ribs and puncturing a lung. But every other time, I always do this.
Target fixation can even affect you when you are sailing through the air. You need to spot that sweet, sweet transition in order to drop your wheels right on to it. Never, never look into the gap between two doubles. This is tricky because sometimes there might be interesting stuff down there. In its heyday the Arbor Lake Jumps in Wheatridge had massive doubles, and in between the take-offs and the landings, the gap was filled with broken kid's bikes and various bike parts. That's right, colorful pieces of jagged, twisted metal are what you had to clear before you touched down on the  steep landing transition.
My downfall came in Fall City, Oregon at the Blackrock trails. These were immaculately crafted jump trails that would flow through the deep forest of southern Oregon. The trail builders came up with an ingenious way to craft transitions without moving tons of dirt. They built wooden frames from the available lumber in the forest, and then filled the frames in with dirt. The trail would wind down the mountainside then lead into a large, wedge shaped take-off. Stacked logs formed the sides of the jump and then the backside of the take-off. Landings were a mirror image of the design.  This meant that the top lip of the landing was a horizontal log that you had to clear in order to reach the smooth, sloping dirt.

I wasn't familiar with the trails, so I was riding with Chris and Bucky, two very skilled jumpers. I was following Bucky and he said something like, "match my speed and don't look down." We started cruising down the trail and I positioned myself a few bike lengths behind him. I could see the first big kicker approaching. Bucky hunched down and then popped into the air, tweaking his bike into a clean tabletop. I shadowed his movements seconds later,  with less style. We gained speed and came into another jump, Bucky  tossed the bike far into a whip before pulling back to stomp the landing. Again I landed safely.

The second jump had been bigger than the first, and we were barreling into the third. I took a few extra pedal strokes and boosted off the tranny. As I climbed into the apex of the jump I tucked in my knees and tried to pull the bike even higher. That's when I noticed what we were jumping over.
I knew that Oregon was legendary for its logging history. I had seen clear cuts from an airplane and loaded logging trucks, but I hadn't actually seen any proof of the 'really big trees.' Now here, ten feet underneath me was an actual 'old growth' tree stump that looked to be five or six feet around. At that point in my life it was the biggest tree I had ever seen. It was like looking at a dinosaur fossil.
I only looked down for a second, but somehow it was enough. When you hit the apex of a gap jump, you start to know whether you are going to make it or not. In high school I struggled with remedial algebra, but when I'm in the air I can perform advanced parametric trajectory equations. And I knew the answer to this one.
I came into the landing like a meteorite falling from the sky. I pulled up on the bars and tried to will my back tire just a little bit higher, but it wasn't enough. My back wheel was a hand built Atom Lab, the roughest, toughest rim I could find. It hit the log first and took a good portion of the impact, but there was still a lot more to go around. With the back wheel stopped, the front wheel whipped down so hard it bent the steer tube on a Marzocchi DJ2. This was an incredibly stout dirt jumping fork. The coup de grace came with a series of cracks around the head tube of my trusty P1. In an instant my beloved brown dirt jumper became a bike shaped pile of garbage. Amazingly, I was completely unharmed. This faithful bike had sacrificed itself to protect me from my own ignorance. So try to remember, look where you want to go, and not where you don't.