November 02, 2019
Colorado has given the world some incredible athletes. Name any sport and you are bound to find a pro-level athlete who hails from a city or town in the Centennial  State. Today I'd like to throw a spotlight on the best freestyle BMX riders Longmont has ever produced. It wasn't long ago that  these two brothers could be found at the Sandstone Ranch skate park on any given night. They have both since moved to California to be closer to the industry and pursue their careers as pro riders. But, having a chance to watch them ride and advance their skills right here in Longmont was truly amazing to witness. One ingredient to their success has to be the time they spent shredding our local park.

After a chaotic opening day in 2006, locals quickly realized that the city had constructed a spectacular concrete playground in the new Sandstone park. With this new opportunity came new conflict. Unlike the Boulder skate park with segregated times for skating and biking, Sandstone was open to everyone all the time. Skateboarders were trying to establish domination of the park though sheer numbers, and bikers refused to give up the turf.  Collisions between riders and skaters were commonplace, empty threats were hurled back and forth as each contingent felt they were in the right. By some quirky law of nature, both factions ride the park in completely different patterns. Bikers stage on the east side of the park. Then they drop into the 45 degree slope, gain speed and air the box going east to west. After landing on the sloped side of the box they can hit the quarterpipe and arc back east in a clockwise oval pattern.
Skaters on the other hand, gather on the opposing side of the park at the top of the quarterpipe. Here they take turns setting their boards on the metal coping and preparing to drop in. Typically a skater will hold this position for five to 10 minutes. If you can count on a skater for one thing, it's a lack of commitment. After enough encouragement  from their peers, the skater will drop in on the quarter and roll all the way across the flat bottom of the street style area. Eventually, they come up the slope bikers go down. Here is the climax of a skater's run, as they reach the top of the 45 and attempt some variation of an ollie. Sometimes they bail trying to clear a traffic cone. Sometimes they bail trying a 180. Some of the more daring skaters bail while trying that Holy Grail of all skate moves, the kick flip. Regardless of the trick being attempted, only one in ten skateboarders will land on their board. These odds lead to loose boards rolling across the park at random intervals.
Those were dark days my friends. Days of lawlessness and bloodshed. Every night more skaters arrived. Only a small cadre of bikers showed up to bravely hold the line. We refused to abandon the beautiful new park, but we were vastly outnumbered. The skaters grew more brazen and animosity reigned. Skaters would drop from the coping in endless lines like bombs from a B-52. One or two bikers would get to hit the box for every dozen skaters coming the other way. Things looked bleak, we began to lose hope. Then one night, from out of the darkness a new king arose to lead us. A black t shirt hung from his tall frame, the overhead lights glinted off his chromed rims as he charged at the box and blasted ten feet above it. Joey Cordova brought a new level of riding to the park no one could have imagined.

No skater dared to cut off a rider with this much flare and intensity. Whenever he dropped in several bikers would know to fall in behind him and form an unbroken train of bikes.  We all learned what his signature moves were, and he inspired all of us to step it up a notch. If he could throw a fully extended Indian air, I should at least do a decent no-footer.
With the bike pointed vertical,  he would arch his torso over the front and turn the front wheel back towards the ground. This was the epitome of a turn-down, and he might do it for his warm-up run. If he threw a 360, it was corked with the nose aimed at the ground, or he would flatten the bike into a one-handed tabletop as he came around. Then came the flips. He would rotate into a backflip, take both hands off the bars and stretch them as far out as he could. Or he would take the same turn-down and toss it into the middle of his flip, so the bike was now pointed into the stars.

Any night he was riding, bikes ruled the park. He inspired riders young and old alike. An entourage of young riders formed around him, and he was quick to joke with the young kids who looked up to him. I remember one night as he rolled in, one of the young grommets made some joking insult at him. Joey launched off the box, spun into a three, and as he came around he pointed his finger directly at the kid and glared menacingly. As the bike rotated, he stayed locked on that kid as long as absolutely possible before whipping into the landing. The weeks went by and new tricks crept into his repertoire. He started taking requests for tailwhips and superman airs. If he grew tired of the box he would lay into the bowl and soar ten or twelve feet out of that.


The riding I'm describing was over ten years ago, Joey's younger brother Matt soon joined him as an artist on twenty-inch wheels. Both of them continue to ride with style and integrity. This tiny little mention doesn't begin to explain just how good the Cordova brothers are. Go check out some videos and I promise you will be impressed by these two Longmont boys leaving their mark on the sport  I found these great photos of Joey shredding on vitalbmx.com 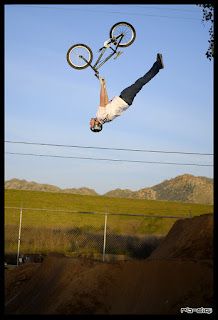 Epilogue: I stopped by the skate park the other day and no one rode bikes or skateboards. I saw a dozen kids enthusiastically riding scooters around. The success rate on landing tricks was similar to that of skateboards, but I didn't see one loose scooter ghosting across the park.