November 21, 2019
Placing my bike in the roof rack of my car is a profoundly satisfying experience. I just hoist my ride up and place it in the track. Next I fold the clamp against the wheel and tighten down the knob, locking the front wheel in place. Cinch the strap down on the rear wheel and it’s good to go! 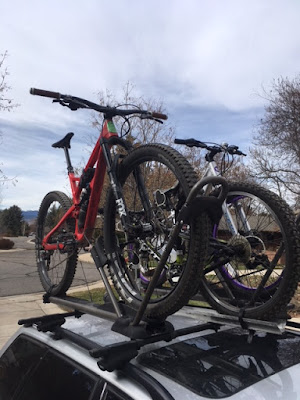 My last bike and rack combo included steps like, remove front wheel, set fork adapter in fork and reinstall front axle.Then the matter of setting a fork, or a fork adapter onto the skewer clamp could also be a challenge. The tension on the skewer seemed to always need some adjusting. I've also pulled the move of arriving at the trailhead only to realize a front wheel was left in the driveway.
The first time I went to Moad, I had two fork mount trays, but we needed to carry four bikes. So, we mounted two of the bikes in the racks. The other two were just bunjee corded to those bikes. That wasn’t even the sketchiest bike carrying I’ve done.
When I first got my VW bus, it had a big plywood sleeping platform in the back, so it couldn’t carry bikes on the inside. And I didn’t have a roofrack. Instead I had one of those aluminum bar, hang-off-the-back-window racks from a garage sale. It worked ok for a couple of light hardtail XC bikes.
One day it was decided I had the best rig to shuttle Kline Butte, outside Bend OR. The drive to the top was essentially a four-wheel-drive road. And the three bikes were forty-five pound downhill beasts with triple-clamps. I had to focus on navigating the bus around ruts and rocks, so I wasn’t thinking too much about a couple thousand dollars of bikes hanging on by two sunbaked nylon straps.
The bikes made it to the top, but at some point along the rally, their weight had flipped the supports out from under the rack and the whole assembly slipped out of place. The three bikes were basically dangling from the straps and bouncing around behind the bus. They might have even hit the ground a few times, plus it scratched the heck out of the bus.

I should have known transporting bikes wasn’t the easiest thing to do from the very first time I tried. Back in the days of ramp riding freestyle bikes, I was 14 and my riding buddy Scott was 16.
He had a license and a beat up Subaru wagon. He also had one of those aluminum strap-on contraptions. One day we loaded the bikes and headed out on the hour-long drive to the Bristol skate park. Bristol had a giant warehouse full of vert ramps, mini-ramps and plenty of other cool structures.

We cranked up the tape deck and started cruising down the road, excited for a day of riding.
Thirty-minutes in to the drive, both of us flinched in surprise when a devastating ‘BOOM!’ erupted from the back of the car. Scott veered to the side of the road and we jumped out to investigate. We smelled burned rubber and found a charred black circle on one of Scott’s tires. The bike had settled low enough off the back of the car that the tire was right next to the exhaust pipe.

So I’m not saying that the hand-me-down, wheel-clamp rack that I have now is the greatest roof rack ever built. I’m just saying its the best one I’ve ever had.