November 03, 2019
Did you have a cycling mentor? Someone who was already at an advanced level and could show you the ropes? I did, his name is Scott.
Bikes were the first thing I fell hard for. My parents were supportive and it mostly kept me out of trouble. The library in my elementary school had rows of magazines in clear plastic covers, and I would devour every word in each copy of BMX Plus. Through the magazine, I had favorite riders, favorite contests and riding spots, and of course, a favorite bike. Then one day, with my parents help, I got it! An electric blue 1987 GT Pro Freestyle Tour. It had pink decals, white tires and mags and white grips.
I had some buddies who were also into the freestyle scene, but all of us sucked. I think one guy was pretty good at doing bunny hops. And the rest of us just tried feebly to bounce on the front pegs, or the back pegs, or maybe throw a bar spin.The success rate of these early tricks was very low. But I had the drive, I just lacked skills and direction.
Then one fateful day, I was just a goofy kid walking out of McDonalds. Sitting by my bike was another kid a few years older than me. "Nice bike," he said, " Can I try it?" I glanced at the bike he had leaned against the wall. It was a Dyno freestyle bike, but his was no longer bone-stock like mine. He had upgraded parts and added cool stickers, the grips were worn completely bald. It was a bike that was loved and ridden hard.
I offered my bike to him and what I saw that day blew my mind. Immediately he was putting my steed through a barrage of spinning, rolling and tail-whipping flatland tricks. At the far end of the parking lot he bunny-hopped up several stairs cleanly and then rode a wheelie up to me. As he handed it back to me he said, " I'd definitely run more air in those tires. My name's Scott." 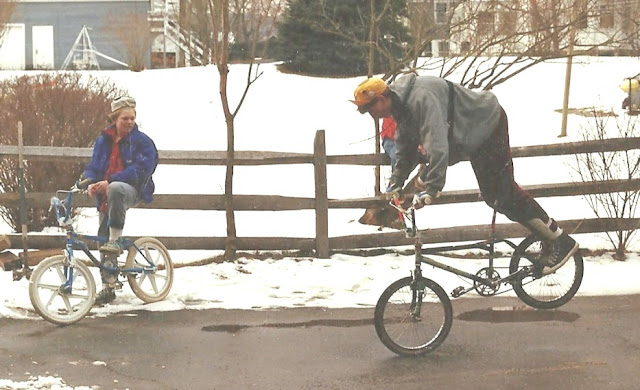 After that we spent every spare minute we could together. He lived in the next town over and went to a different school, but in rural New England, riders will work to find each other. With his encouragement, I pushed myself and practiced. Gradually I started learning some basic skills and used them as foundations for more advanced tricks.  Scott was also learning and expanding his skill set. One big trick for me was called a "Miami Hopper." I'm serious.. it's a real thing. The rider grabs the front brake like an endo, then lets go with one hand and the bars spin 90 degrees. Then the rider is holding the tip of his seat and one hand grip while the bike balances on the edge of the turned front wheel. By the time I could do this trick and just balance there for a few seconds, Scott had gone several levels beyond. He could bounce around in little circles on his front wheel. Then every few bounces he could spin the bars and catch them again, and just keep bouncing.

We kept riding together all through high school and for a while after. The tricks got more advanced, and we started riding ramps. Then I moved to Colorado. I immediately discovered mountain biking and sold the freestyle bike. Scott also moved on to mountain biking in the Berkshire mountains of New England. Often when I'm out riding I'll think, 'ooh I bet Scott would love this trail.'
I'm so grateful to have found a rider and a friend like him when I was first starting out. He was a great mentor.  I've talked to quite a few people who unfortunately found lousy mentors. These are the people who take a first-time skier to the top of a black diamond,  or a first-time mountain biker to the top of a rock garden. I simply can't understand why people do this. It's not a fun ride for the more advanced rider if they are constantly waiting or picking up the pieces of a crash. And for the newbie there is a potential to be so discouraged they give up on the sport all together. Acting as a mountain biking mentor isn't easy. It generally means you might be dropping down to a slower pace, or riding less challenging trails than you would normally ride. You may also need to articulate advice and helpful tips as the newbie struggles along. Yelling  "Shift down you idiot!" might work in some circumstances, while a more gentle approach could  also be helpful. It all comes down to what your goals might be as a mentor. Do you want to be remembered fondly as a wizened master who taught someone a gift that lasted them a lifetime? Or do you want to be that jerk who brought a new rider down Bitterbrush one time and they hated it so much they sold their bike?