November 30, 2019
I’m not good at ball-sports, or really, team-sports all together. In little league I once tried throwing the ball from right field to first base. Instead I threw the ball out of the park and hit a guy sitting in the bleachers. As a high school freshman I tried out for soccer and qualified for the sub-sub-JV team.
The cross country team needed runners, so I quit soccer after a week and I ran. I ran in the fall, and then I ran again in the spring for track. I wasn’t good, but I could do it. All that really mattered was that I crossed the finish line. Running helped me develop the mental state that I use nowadays when I’m tackling a long climb. I don’t need to enjoy it, I just need to zone out and keep putting one foot, or pedal, in front of the other.
My state had one professional sports team, a hockey team called the Whalers. But they broke up, or moved on a few years after I moved to Colorado. I love the atmosphere of a Rockies game or watching the Eagles. But I have nothing at stake when I watch, I have no emotional attachment. The thing is, I’ve never really sat and watched a game that I had any interest in...until now.
My oldest daughter just started playing soccer on the competitive league with St. Vrain Football Club. Holy Cow! These games are intense! Now I finally understand it, I can see why spectators yell, and cheer. I felt the glimmer of hope from a good pass. I felt the pain of a crushing defeat. The highs, the lows, the anxiety and the adrenaline. I felt it all, and I don’t like it.
A 2017 study published in the Canadian Journal of Cardiology suggests that the thrill of victory and the agony of defeat can have a substantial effect on the cardiovascular system. The study showed that men under 55 have significantly more heart attacks the day after a Montreal Canadiens victory. I could definitely feel this during the game. My heart was pounding, my adrenaline surged, and all I was doing was just sitting on the side watching. 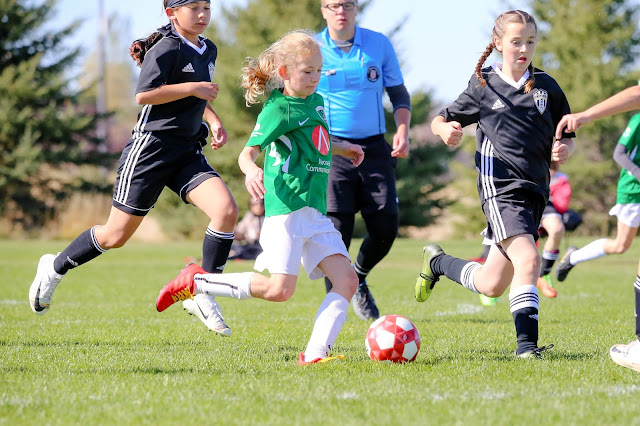 When I’m mountain biking I experience all these same emotions, and the flood of cortisol, adrenaline and seratonin. The big difference is that I’m moving and I can burn these hormones out of my system as they are produced. Say I’m railing down some singletrack, I look ahead and see that the last rainstorm washed out a big rut. Instantly my body may begin to experience anxiety as I realize I won’t slow down before the rut. Cortisol, the primary stress hormone releases glucose into my bloodstream as the anxiety builds. I start to believe I’m going to crash hard.
Then, I see a line over the rut. Adrenaline is released from the adrenal gland. It increases my heart rate, elevates my blood pressure and boosts energy supplies. I crouch, and then pull upward on the bike, using all my energy to bunny hop over the rut. I grin wildly having averted disaster. Dopamine rewards my body for preserving itself as I continue down the trail.
When you’re being physically active these hormones are quickly reabsorbed into your bloodstream. These hormones were originally part of the fight or flight response developed by our cave-dwelling ancestors. If danger popped up they needed these chemical boosters to survive. I think using them in a physically active setting is the proper time and place.
Unfortunately, I also experienced this chemical onslaught while I was sitting in a camp chair watching ten-year-olds play soccer. In this situation the chemicals did not quickly dissipate. They just simmered in a stew of conflicting emotions. I guess like any chemical in the body, long term users develop a tolerance. My sister-in-law is a true Broncos fan. She understands that if she doesn't wear her jersey on game day the team won't play at their full potential. If the team settles into a losing streak, this starts to affect her daily outlook on life. These concepts are foreign to me, but I feel like I'm starting to get a glimpse into this world.
I think it's best if I play it safe, and every weekend she has soccer games, I'll be sure to get out for a ride afterward.