It’s good to set limitations for yourself. Pick some sort of qualifier and tell yourself that this is a rule you need to live by and your life will be better for it. Here’s a few examples, ‘no caffeine after noon’, is one.  Or, ‘Never drive more than 10 MPH over the speed limit,’ Another good one,  ‘liquor before beer’. Just basic limits that help keep things in check.
I certainly don’t believe that my life will collapse over one early evening mocha. I just don’t want to do it every night. It’s that moderation thing. I heard that Marilyn Manson is a strong believer in moderation. Apparently Mr. Manson does drugs, but he keeps someone close to him as his drug handler. When the handler says, “that’s enough for tonight,” Marilyn rolls his two different colored eyes and grumbles, “fine.” He respects the prearranged limitations.
When I was a year or so into my freeriding phase, I realized I needed to set some limits for myself. Some of my friends were dead-set on making each stunt bigger than the last. They were investing in long travel bikes and focusing on hucking themselves further and further with each jump. I tried to keep up for a little while. Then I realized that the consequences of crashing at this level were much more severe. I had to back off.
I declared that if I couldn’t do a stunt on a hardtail, then I shouldn’t be doing the stunt at all. I stopped riding my Kona full-suspension, and got my first Specialized P bike. This decision probably saved me countless injuries. And I also didn’t have to spend extra cash on full-suspension maintenance. My friends couldn’t taunt me into hitting some crazy gap jump. Those jumps were simply off limits to me.
I loved being a hardtail freerider. I started to develop better style and smoothness. I no longer had the ‘mistake eraser’ of a full suspension. The years went by and I continued to progress as a rider. Eventually I noticed another boundary that I was bumping up against. Most of the time I just wore a cheap open face, ‘skid lid’ style helmet. But every now and then, a new challenge would arise that I felt required a little extra protection. That’s when I would don the full face helmet.

I can’t pinpoint exactly what prompted the need for facial protection, but I knew it when I saw it. This led to my second self-limiting declaration. If I needed a full face to do it, I shouldn’t be doing it. Sticking to these red lines on the tachometer of fun didn’t keep me totally safe. But I have to believe that it helped. I gradually moved away from the freeride and dirt jump scene. And everything was fine. I was like an ex-Hells Angel or Mary Kay sales associate who got out of the culture and left it all behind...or so I thought.
It seems my friends are changing the game and forcing me back up against one of my qualifiers. They’ve started wearing full faces on the trail! Is this a thing? Sure, I noticed a couple of other riders here and there with them. But I assumed those guys were new at this or maybe unsure of their abilities, or maybe they were mouth models. The important thing was I didn’t ride with them.

But this is my crew, guys I ride with all the time. We ride the same trails at the same speeds, and tackle the same obstacles. If they are going full face does that actually mean that this level of riding requires a full face? And if so, doesn’t that mean that I shouldn’t be doing it?
I asked my friends about their helmet choice, and as you can imagine, they had perfectly sound responses in favor of the full face. Duncan  had a experienced a very close call with an open face and realized the need to up-armor. Brian noted that the new helmets are light, comfortable and provide plenty of air flow. Both agreed that the trail network we always ride is a step above normal front range cross country trails. These trails are fast, technical and always evolving to be faster and more technical.
They pointed out that I always wear kneepads. And I said, "yeah, well that's different." But is it really? I feel naked riding without knee pads.
I think the fact is, the bikes themselves have increased the speed of cross country trail riding. My Gary Fisher Hoo Koo E Koo had a steel frame and maybe 3/4 of an inch suspension travel on the front fork.


After careful consideration, and the fact that I will need a new helmet next season, I think I'll be upgrading to a full face. Not because my friends are wearing them, and not because I think trail riding has become too dangerous. I would like to wear a full face simply because I make horrible faces when I ride and this way no one will see them. 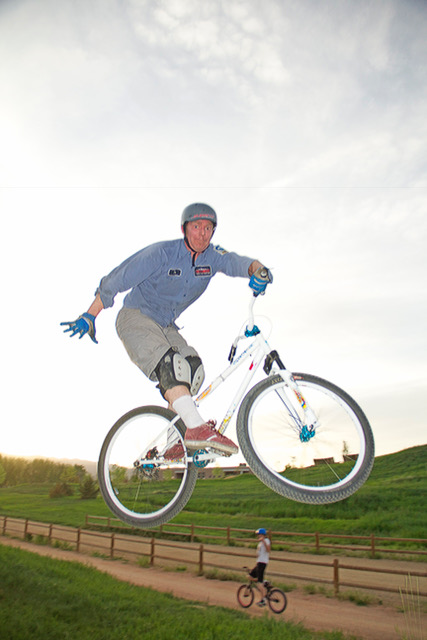 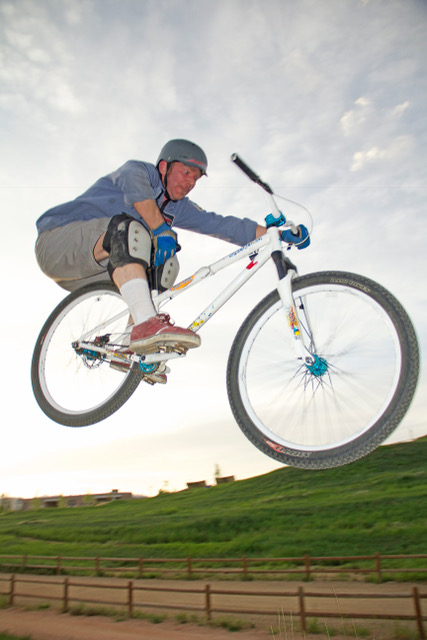