November 10, 2019
A few years ago I convinced several friends to join me and ride The Gold Rush Bike Rally. This is a great ride that took us up gravel roads, over rough, rocky singletrack and then dropped us into winding canyon roads above Boulder. We rode a combination of mountain bikes, commuter and cyclocross bikes. 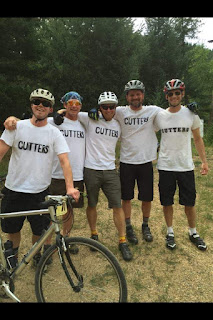 A funny thing about cyclocross bikes is that they continued to use cantilever brakes  long after that style of brake had gone extinct on mountain bikes. This post is about those brakes, and why they should be extinct.
The pavement felt fast and smooth after beating ourselves on the rocks and ruts of the Switzerland Trail. My brother was riding an older cyclocross bike and he started hauling down the hill with the rest of the team. In an instant his back tire violently blew out and he skidded to the side of the road with his foot down.
The team all gathered round and quickly had the wheel off his bike. The sidewall of the tire had a thin crescent shaped slice in it, and a small bubble of tube had come through the tire and popped. I said to the group, "Ahh, bummer, you knocked the wheel out of round and the brakepad ate into the sidewall." They looked at me like I was setting up a joke.
"Seriously, we can line the tire with a dollar bill and back the brakes off to get it rolling." They looked at me like this was the punchline, and it bombed.
"I bet a rock scraped against it." One said.
"Maybe something got caught against the frame and the tire," said another. They started breaking down the tire and I slowly backed away from the group. I couldn't believe it, I had become the rambling old man no one listens to.

Canti brakes started in the eighties, then the nineties opened with canti and closed with V brakes. So depending on when you started riding mountain bikes, you may never have experienced this technology. They're an obscure, out-dated reference, a little like a flip phone. They weren't around that long, and they weren't that good. All the components are roughly similar to V brakes, but there is something magical about running the cable in from the side instead of squeezing both pads together from the center. One thing V brakes eliminated was a horrifying squeal that canti brakes could develop. Imagine you pull up along side your friends at the bottom of a long fast downhill. "How far back was Johnny?" someone asks, and before any one needs to answer, a lone banshee cry echoes out from the hillside above. 'SQUEEEEEEEK!...SQUEEEEEK!' It was the sound of smoking hot brake pads completely glazed over, and once it developed the only thing you could do was take your pads off and rub them on  sandpaper to take the glaze off.
But the most diabolical aspect of this brake set-up has to be the sidewall slicing capability. If a rim got knocked even slightly out of round the edge of the brakepad would start making contact with the thin sidewall of the tire, cutting into it a little more with every rotation. It's like the blade in The Pit and the Pendulum. Dang, another obscure, out-dated reference.
Ok, it's like something from the movie Saw, imagine a sharp blade sweeping back and forth, getting closer and closer with each pass. Did you see Saw? Maybe you could ask someone who saw Saw.
Eventually the pad would cut completely through the sidewall material. Then you only have one pass as the tube squeezes out of the hole, a second pass as the pad partially cuts through the tube and on the third pass...BOOM! total air loss.
This leaves you with three issues to deal with. One, patch or replace tube, two, use something like a dollar bill to cover the slice in the sidewall long enough to get home and three, reset your brakes so you don't just do it again. I once had this type of failure that happened so perfectly it couldn't possible be duplicated.
Sometime in the 90's I was riding Hartman's Rocks in Gunnison. We were riding down a long double track with perfectly spaced out waterbars. Rob was ahead of me, and we both had it pinned. I wanted to catch him and he knew it. Like a deep-sea fisherman, I was slowly reeling him in. Both of us would feather the brakes through a corner, or drop a foot, then pedal hard into the straightaway. Then the waterbars would come up and each of us would boost into the air on hardtails with an inch of travel on the front fork. At some point, my pad started chopping into my tire, but my only focus was on catching Rob.
I finally had my chance for a pass, it would be right at a waterbar. I came into the transition just a little faster than him, we both preloaded the lip and took to the air. As I left the dirt, the pad cut through the tire, as I pulled level with him the tube squeezed out and took one slice. I floated past him in the air as my tire came around again. BOOM! My back tire was probably equal with his front tire when the tube burst like a firecracker. I was running some Slime in my tire, and that sprayed out in a fine mist speckling his face, as the sound scared the crap out of both of us. I can't remember if I stuck the landing with a blown out tire. Probably safe to assume I didn't.
The demise of cantilever brakes and the rise of V brakes was one of the best transitions mountain biking ever made. Remember this the next time your disc brakes develop a very slight rubbing noise at the caliper and it's driving you crazy how annoying it is.